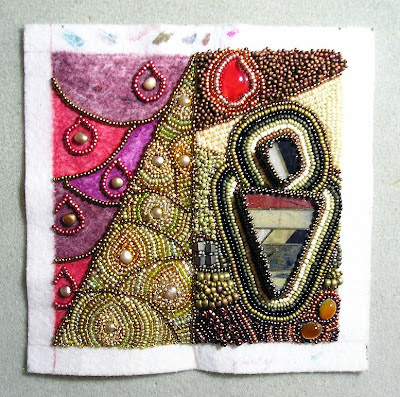 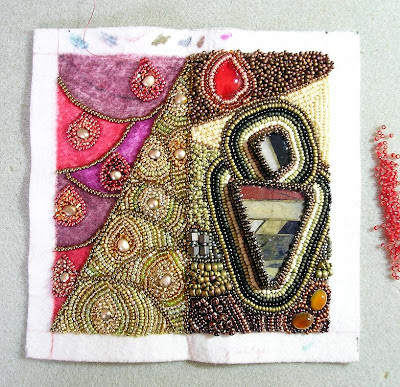 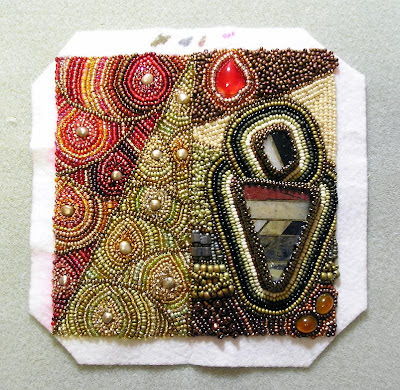 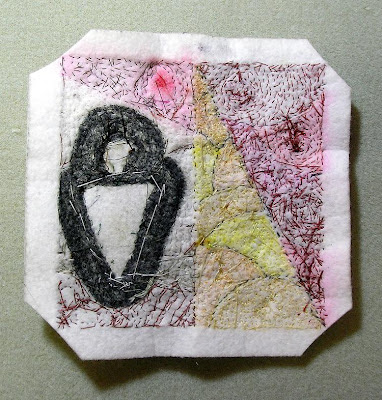 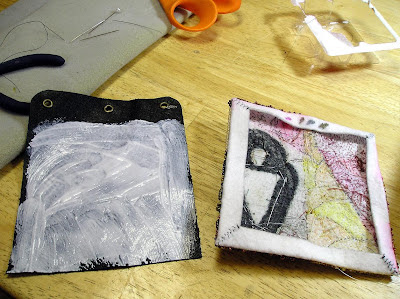 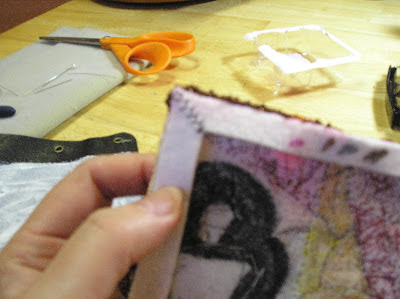 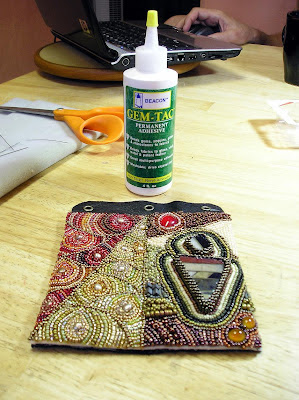 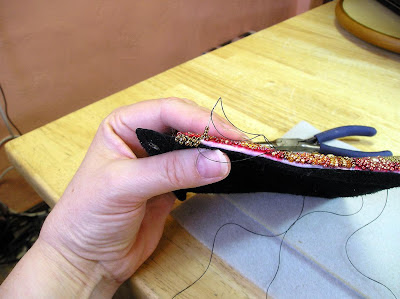 The page is nearly done, so I thought I'd write a little about the symbolism that evolved as I worked on this piece. The page is titled, "Fire/Self-Portrait." As you face the piece, the section on the left is the Fire half. First are the descending red flames of destruction, followed by the green fire of creation. There are five pearls on the red side and seven on the green - I will be 57 tomorrow. There's more to this. 5 plus 7 equals 12, representing the 12 principles of Buddhism, a discipline which has interested me since my two years in Japan. On the Self-Portrait half I'll begin at the bottom. These rich wine colors and varied textures stand for the first 20-something years of my life, born and growing up in California. My two children were born there and are represented by the two amber cabochons inside the lemniscate, or symbol of eternity - as our children are indeed our immortality. The next two layers stand for my time in South Dakota and then Nebraska. The bubbly green layer is my time in Japan. The layer surrounding my head is where I am now, here in New Mexico - here in the desert, where I found my own enlightenment. The next layer is the future, full of the fires of inspiration and the warmth of a life well lived. The many-layered stone I chose to represent myself is full of flaws and imperfections that still somehow result in a thing to marvel at, a study in contrast and harmony, dark thoughts and light.

Some technical notes:
I secure the cabochons to the interfacing with Gem Tack. I love this stuff. I use it to bond the finished beadwork to the leather backing as well.
A word of warning about using Sharpies; the red comes off the fabric and onto your fingers if they're even the tiniest bit damp. When I finish doing the beadwork, I soak the piece in cold water and a bit of Woolite, just to get my grubbiness and pencil marks away. This time, the water turned a bit pink, but after the final rinse the color had stopped bleeding. It was only the red that did this, and from what I could tell the color fade was minimal.


Time for some responses -

@ beadbabe re:Melusine; I honestly don't remember how my mythic doll series came about - it was so very long ago. I remember I had just finished reading Guy Gavriel Kay's fantasy novel, Sailing to Sarantium, in which one of the main characters is a mosaic artist. This led me to a book on Byzantine art and marveling at the wonderful mosaics of the early Roman empire. From that I adapted my beaded faces.

@ Angela; I think the underpainting worked out well. It gave me a more grounded sense of the piece and helped me break away from some very stodgy color choices I had originally made. I think it helped almost 'backlight' the flames.

@ everyone! Thank you so much for taking the time to share this great project with me. Every stage is a learning, an expanding, a revelation and a wonder.

Now while my fingers heal up and before I start my next project (tentatively titled 'My Little Painted Pony: The Monet Edition', I've got some Harry Potter to read and a poem to write.